How junk food tricks you into eating too much 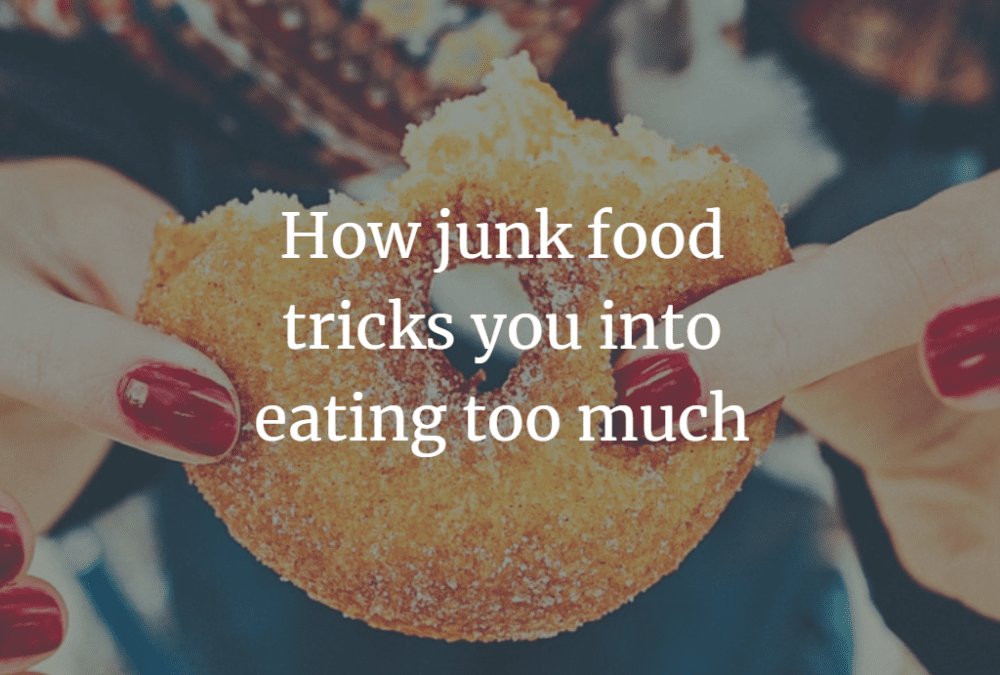 I read a fascinating study that I just had to share with you. Personally, it made me even more committed to eating a diet based on real, whole foods most of the time.

It’s all about how ultra-processed foods make us want to eat more.

The study was conducted by the National Institutes for Health and published in the journal Cell Metabolism.

Scientists had 10 men and 10 women check into a clinic for a month and fed them a controlled diet. For two weeks they were given meals consisting of ultra-processed foods, and then for another two weeks they ate a diet of minimally processed foods. They could eat as much of their meals as they wanted.

As an example, an ultra-processed breakfast was a bagel with cream cheese and turkey bacon, while a whole foods breakfast included oatmeal, bananas, walnuts, and skim milk.

When they were given the ‘ultra’ processed diet, the study subjects ate their meals faster AND consumed about 500 more calories a day… not surprisingly, they also gained an average of about 2 pounds!

Meanwhile, they lost about 2 pounds on the minimally processed diet.

This is the first study to ever show a direct relationship between processed foods and weight gain when other factors are controlled. Even so, it’s something we’ve kind of known over the years, right?

But here’s the kicker: processed foods are filled with things that make us want to eat more – salt, sugar, and unhealthy fats. So not only are they linked with eating more, they ALSO contribute to chronic health problems!

When we eat MORE of those foods, we’re taking in yet more things that are not good for us! (Other studies have suggested that junk foods are engineered specifically to make us want to eat more.)

Now here’s another ‘shocking but not shocking’ aspect of the study: the processed diet was actually much CHEAPER (by almost 50%!).

Scientists estimated the weekly cost to prepare 2,000 calories a day of the ultra-processed diet at $106, while the minimally processed diet cost $151, based on the prices at a nearby supermarket.

Now that was one supermarket; eating healthy doesn’t have to be this expensive if you’re smart about it.

How can you save money when it comes to eating a healthy diet? Buy in bulk, eat more beans and legumes, shop sales, join a food co-op, buy fruits and vegetables that are frozen or in season, start your own garden, and use your freezer as much as possible!

Here’s my personal takeaway on this one. The food you eat is SO MUCH more than just ‘calories.’ The quality of your food has a powerful effect on your health and well-being… and eating a healthy, whole-foods-based diet makes a strong statement to manufacturers when it comes to our food supply.

“Over time, extra calories add up, and that extra weight can lead to serious health conditions,” said one of the scientists in a press release about the study.

Remember: money spent on your health is an investment in your future self.

I’ll show you how to plan, prep, cook, and store your food so that you always have a healthy meal ready-to-go. And I’ll even show you how to make it fun!
Get my FREE Meal Prep Guideat https://adelefrizzell.com/mealprepguide/

Do you have a personal alternative when you are craving junk foods? Let me know below.